Macsys was founded as a General Partnership (Dutch V.O.F.) on October 13, 2006 by A.J.P. Schalkwijk and M. Alfons. The name Macsys is inspired by CAM software Cimatron, where MACSYS stands for MAchine COordinate SYStem. Macsys Engineering B.V. and Macsys Holding B.V. are founded May 22, 2012, replacing the existing partnership structure. In 2019 Macsys Engineering BV activities have all been transferred to Macsys Holding BV.

Traditionally, architectural models are handmade using various materials. These materials have a look and feel that is close to the finished building, something that can not be achieved with 3d printing. The benefit of 3d printing is speed. A virtual 3d model is created faster and in finer detail then hand crafted models, especially if the building design is available digitally. Because 3d printed models are build up in layers, the surface finish is inferior to traditional models. The surface finish however can be improved by sanding or bead blasting.

Macsys pilot project (non-commercial) involved CAD modelling and printing of a 1930's house located in Woerden. The printed house is glued on a wooden pedestal. This model was used as proof-of-concept and a demonstration project for potential customers.

The first commercial project for Macsys was creating a colored 1:50 scale model of a villa in Dronten. Details include; tiled roof, water drainage pipes and muntin windows. At the time of modeling this project, there was no 'shell function' available in SketchUp, meaning that creating the correct wall thicknesses had to be done manually. A very tedious and time-consuming task, which is fully automated in most solid modelers. The second project was a huge jump in complexity. It was requested to build a scale model of a 900 m² mansion. It was requested to build the model with an open roof, making it possible to view the internal layout. Since the scaled model was larger than the available 3d printer, the model required sectioning. Building plans for the 30m x 30m mansion were available in AutoCad 2d format. The mansion includes: a swimming pool, sauna, fitness room and underground parking. Macsys's third model was a challenge in terms of detailing. The unique house design includes an elevation, round structure, high detail stairs, pillars and balcony. Since printed models are relatively weak, scaling was done non-uniform, so that the finer details are printed somewhat bigger and are thus stronger.

After the first projects were successfully launched, demand for models increased. That is why Macsys partnered with a SketchUp modeling firm based in Thailand. This allowed Macsys to increase its design capacity and take on more work and more challenging projects.

The Dip-Clip® logo is a registered trade mark at the The Benelux Office for Intellectual Property. 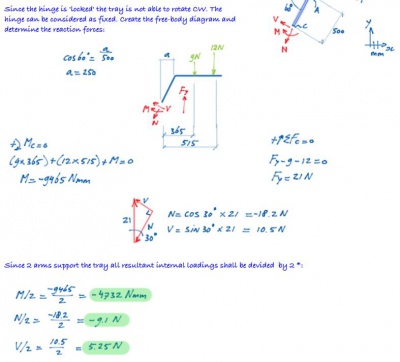 Equilibrium of a Deformable body

Mathcad is computer software primarily intended for the verification, validation, documentation and re-use of engineering calculations and was developed by Mathsoft. Mathcad has WYSIWYG functionality, which is a big advantage over the 'hidden' and 'text based' formulas used in Microsoft Exel. Macsys uses Mathcad Client 2001 for making and reporting engineering calculations. A practical starters guide for learning Mathcad can be found here.

SimWise 4D was born when DST acquired a license from MSC Software Corporation to the MSC.visualNastran 4D (vn4D) product. The software traces its roots to the Working Model 3D product developed by Knowledge Revolution, which was acquired by MSC in 1999, extended to include FEA capabilities, and renamed Working Model 4D. It has found tens of thousands of users among engineering professionals, students, and educators. In December 2020 Macsys Holding BV acquired a perpetual licence from DST for the use of SimWise 4D software.

How does Crypto currency actually work?

Brain Man; the boy with the incredible brain